In the early 1970s, in need of a critical response to the commercialization of film production and programming, Barbara Meter Netherlands, b. 1939) co-founded the Electric Cinema.

In the early 1970s, in need of a critical response to the commercialization of film production and programming, Barbara Meter  Netherlands, b. 1939) co-founded the Electric Cinema. Run by members of the Amsterdamse Film Coop, and STOFF (the Studio for the Development of Film and Film Manifestations), the theater became the epicenter of Dutch independent and avant-garde filmmaking. At the Electric Cinema, Meter curated international avant-garde and expanded cinema programs. After that, she cocreated POLKIN (Political Kinema) and made documentaries as part of activist and feminist movements. 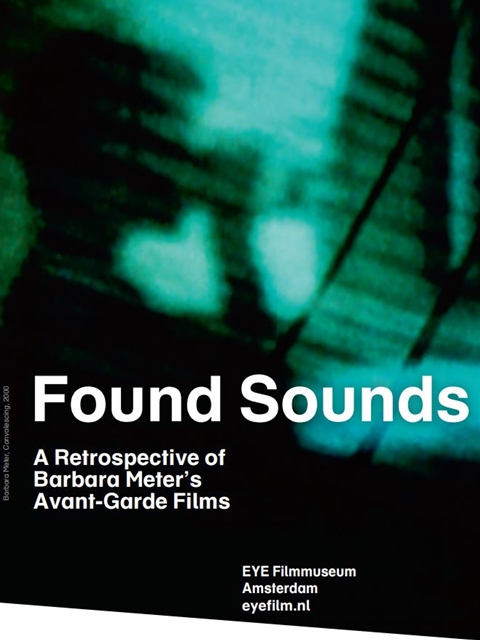 In her avant-garde films, she pushes the cinematic medium forward with her unique way of repurposing documents and audio recordings, utilizing an innovative, masterful application of optical printing techniques. Meter manipulates the images and reworks found sounds to fi nd and create a personal expressive mode. Her essay ‘Looked for and Found: On Archival and Found Footage Film’ was written in 1995 for the London School of Printing, and continues to be of radical importance. After many years of work, the EYE Filmmuseum in Amsterdam, working closely with the artist, has preserved Meter’s films in all their delicacy and complexity.

‘What I usually hope to achieve is that image and sound follow their own path, but often connect, after which they distance them selves again—and then connect again.’

This all-celluloid program has been curated by Mónica Savirón, and organized in partnership with EYE Filmmuseum. Found Sounds was originally shown at the Milwaukee Underground Film Festival in Wisconsin, Museum of the Moving Image in New York, and (S8) Mostra de Cinema Periférico in A Coruña in April and June, 2017, with the support of the Consulate General of the Kingdom of the Netherlands.