Joost Rekveld is an artist who is motivated by the question of what we can learn from a dialogue with machines. His films are a direct result of his deep fascination for the technological world which surrounds us, both analogue or digital.

In 2015 the works of internationally renowned Dutch multimedia artist Joost Rekveld were added to the EYE collection. This was the starting point of an elaborate restoration of his early works, undertaken in close collaboration with Rekveld himself, which has resulted in two curated programs of his abstract films. These are available for screening from January 2017. The films span Rekveld’s whole career from his earliest film #2 (1993) to his most recent work #67. The two programs are centred around the four early works recently restored by EYE, which include #2 (1993), VRFLM (1994), #5 (1994) and #7 (1996). The two programs will world premiere at the International Film Festival Rotterdam 2017.

Joost Rekveld is an artist who is motivated by the question of what we can learn from a dialogue with machines. His films are a direct result of his deep fascination for the technological world which surrounds us, both analogue or digital. In his approach to creation he bridges art and science, and is often inspired by the forgotten corners of history in science and technology. His abstract films resonate internationally and have been shown worldwide at several festivals and venues.
Tekst (2 kolommen) 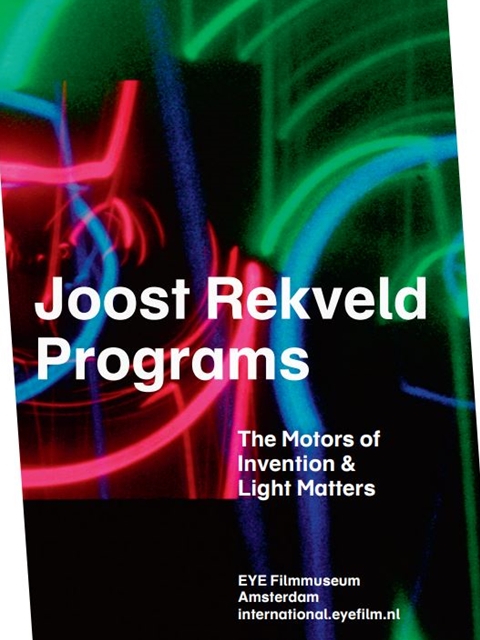 ‘The EYE Filmmuseum’s relationship with Joost dates back to 2004 when he was commissioned to curate a program and an installation called A House in 4 Dimensions. In 2015 Rekveld’s films were added to EYE’s collection. This was a logical follow-up to our commitment to collect and preserve Dutch abstract films, which started with the fi lms of Peter Struycken and continued with Bart Vegter and Maarten Visser. By mutual agreement we began the restoration of Rekveld’s early works as those were the ones that had been neglected the most over the past 24 years, and needed specialist care. These included #2, VRFLM, #5 and #7.

From the beginning we decided on digital restoration of these films as well as produce digital projection copies. Two factors informed this choice. The first is that digital techniques offer a wider range of possibilities in removing damage and controlling color, so crucial in Joost work. The second reason was the wish to enhance the screening possibilities of these films in an era when 16mm projection is becoming more diffi cult or unreliable.

Of course the starting point was to remain as close as possible to the original intention of the artist but in the process of changing formats we encountered some challenges inherent within the medium. The solutions we opted for were always agreed upon with Joost who has been behind this process from the very beginning.

These restorations should not be considered a replacement of the existing analogue copies of Rekveld’s work but more an updated reinterpretation of them, using the modern technology of today. We hope that making these films available again in the new versions will increase their visibility and enable them to reach out to a wider audience.’

For more information about the programs:

Program 1: The Motorts of Invention

Many of the early films of Joost Rekveld find their inspiration in the fundamental character is tics of the film medium. This program gives an overview of the develop ment of this strand in his work, with the films VRFLM and #7 as two very different explorations into how one can directly compose the material for the 16mm film strip. The fi lms #3 (1994), #5 and finally #11, Marey <-> Moiré (1999) show the evolution in Rekveld’s reflections on how the medium film deals with time; for these films he developed his own tools based on long exposures, scanning and chronophotography. His most recent work #67 addresses similar concerns from the world of analogue HD video.