Dan Geesin’s mind-bending new film will have its world premiere at the Imagine Fantastic Film Festival, Amsterdam, which runs October 26 to November 4. It had a preview at Encounters Film Festival in Bristol within an exhibition of the film’s props and costumes. 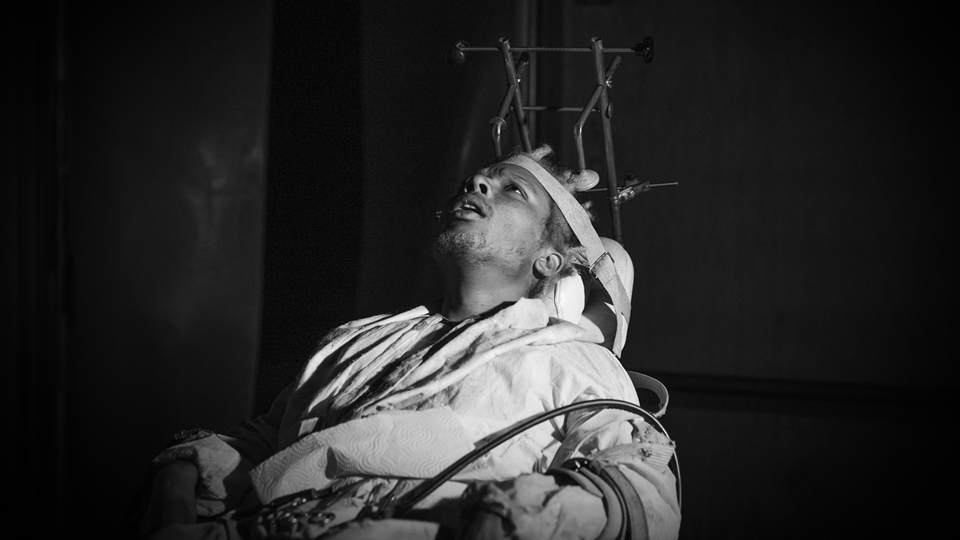 Imagine a dystopian future in which the ruling class, the Antiques, are dependent on the saliva of the lowly Bakelites, to survive the Bloom, a deadly cloud that feeds on tiny plastic particles in human bodies. The Bakelites are at the bottom of the social ladder but some of them have developed a resistance in their saliva glands to all of the toxins that their richer counterparts are trying to protect themselves against.

This is the world conjured up in Dan Geesin’s mind-bending new film Sputum, due to have its world premiere at the Imagine Fantastic Film Festival. “I thought it would be interesting to explore what would happen when the meek inherit the earth,” the Anglo-Dutch filmmaker says about the inspiration behind Sputum. “In a polluted world where the society is based on hierarchy, how would it work if the underclass, the untouchables, were actually in possession of the antidote for everyone else?”

Geesin, now 51, was in primary school in England when he saw the first Star Wars film. He wanted Sputum to give viewers the feeling they too were being transported to a world far, far away. He conceived the film more than 10 years ago, at a time when he was “very depressed about something I had no control over. In a way, the film is an ode to failure and entropy - what happens when there is a complete loss of hope.”

The film is shot in monochrome, and light is “very much a character,” Geesin says. So, of course, is the saliva. “Some people think that is really disgusting, but it is what parents do to kids when they are wiping off jam from their faces. They lick their fingers and they rub…” Geesin imitates a wiping motion. “It [saliva] is a disinfectant as well.”

The director describes Sputum as “a film for big children.” He acknowledges it is “enigmatic” and a “puzzle” but that is part of the pleasure. The cast, led by Yannick Jozefzoon as the rebellious Bakelite and Jade Olieberg as the aristocratic Antique deserter Kalta Crux, are Dutch, but Geesin shot the film in English.

“I wanted to use the handicaps of Dutch actors in their English,” the director says. The film has its own, deliberately arcane vocabulary (for example, saliva milked from the Bakelites is called “Pheno Odds.”) There are also Dutch words mixed into the dialogue.

If you do not pay careful attention, you may miss some of Geesin’s cryptic and poetic flurries. He points out that some of the humour is “brutally stupid, childish playground-jokes from when I was nine and full of imagination…” Characters will suddenly utter lines like, “come here, I am going to cut off your tits” or “do you want to smell my chuffin perhaps,” or, “let me piss on the past and spit out our future.”

Geesin worked on Sputum with his partner Esther Rots, one of the Netherlands’ leading directors who helped produce and co-edit the film. Asked to characterise their collaboration, he suggests that he is “quite ruthless” when it comes to “killing your darlings.” If a stronger idea develops during the making process than what is already in the script, it will always be accepted. “Film is a team sport but there is always a tyrant at the top. When the film is mine, I am the tyrant. When the film is Esther’s, she is the tyrant. That is just the way it is.”

Geesin, meanwhile, is now pushing ahead with his next project, titled A Fucked-up Tribute To Motherly Love. Almost financed (shooting in spring 2023), this sounds like a cross between Jonathan Swift and David Cronenberg. “It is an adult coming-of-age story in a world where people literally explode from unfulfilled expectations - and where children can be literally cooked from jam made from the best parts of their parents… it plays with misunderstandings between generations, cultures and classes,” the director cheerily explains.