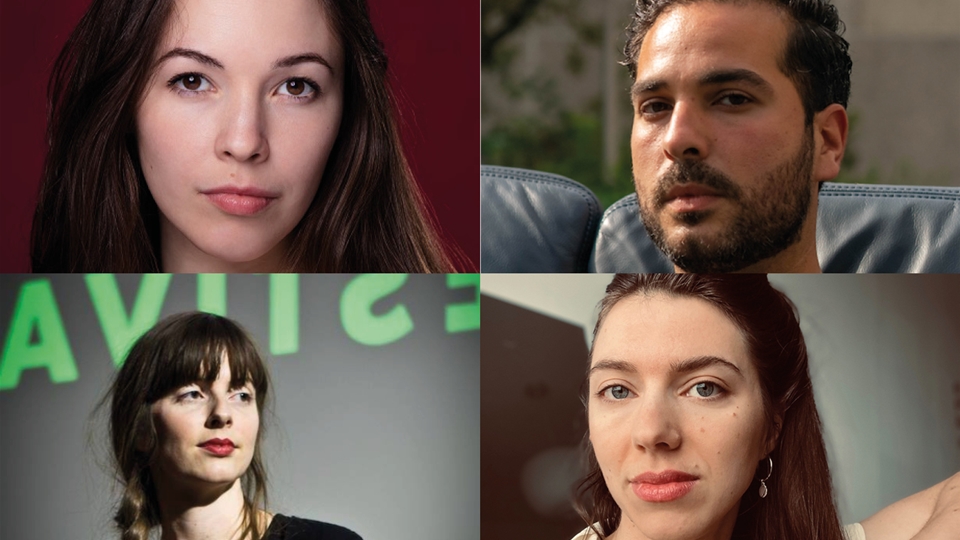 Stefanie Kolk’s feature film project Melk is selected for Berlinale Talents Script Station, so her involvement will be as part of an intensive script consultation programme, during which each project is dissected, discussed and developed, culminating in a public presentation under the keen eyes of industry players.

A Berlinale Talent in 2019, Kolk’s graduation film Clan, and her other short films Harbour*) and Eyes on the Road*) all premiered at Locarno International Film Festival’s Pardi di Domani International Competition (in 2016, 2017 and 2019 respectively).

Melk is a feature project which she been developing with Erik Glijnis at Lemming film and which recently received De Oversteek (a collaboration between the Netherlands Film Fund, NPO-fonds, CoBO, VPRO and NTR) script development funding. The film, co-written with Nena van Driel, concerns Robin, a young woman who, after the stillbirth of her baby, is unable to discard the milk her body still produces. So she goes on a quest to find a place to donate it, which turns out to be a longer and more difficult process than expected. “I envision the film as a warm-blooded, peculiar drama about our animal instincts,” Stefanie comments.

What does she believe are her strengths as a director? “I used to be a scientist, now I’m a filmmaker. Actually the two things are very similar. As a good filmmaker, or a good scientist, you’re genuinely curious, you try to look at things differently than others, and you allow yourself to be guided by adventure. You have to be open to what comes at you in the process, because art - just like nature - has a way to surprise you. I think that’s a strength of mine. How that shows in my work, I wouldn’t know. The people I work with say my films are atmospheric, layered, tense and precise.”

And what would be Stefanie’s ideal Berlinale Talents takeaway? “A better script, and a little break from the quarantine bubble with lots of new encounters and ideas!”

DoP Aziz Al-Dilaimi describes Berlinale Talents “as a kind of a Master’s degree which will broaden and deepen my craft. This, in combination with connecting with peers from different countries who are in the same phase of their career, will be a unique chance to learn and share experiences. To me, that's invaluable.”

In 2015 Aziz graduated with Nachtoord, winner of an NFF Wildcard, the Topkapi Fiction Prize, VERS Awards jury prize and NFF Producers Award, as well as official selection for Cannes and Camerimage.

In 2017 Aziz shot the television film Jungle, which was nominated for two Golden Calves. It was also the Dutch entry for the Emmys, Prix Europe and BANFF. The short film Nothing to Declare*), which Aziz shot with the Jungle team, was also chosen as the Dutch entry for the 91st Academy Awards in 2018. In 2020 Aziz received the ADCN professional prize for best cinematography for Sexorcism, and also completed shooting his first feature film Femi.

“I hope that others would describe my strengths as the ability to fully dive into the characters of the story and how they view the world,” Aziz comments. “This approach gives the director the tools to make the story come to life. These thoughts and insights ideally inform the way the mise-en-scène is created, and the form in which the film will be shot and presented.”

“Both in form and story I always search for the humanistic perspective, and I try to create empathy within the audience for the characters and worlds we portray,” he adds. “I consider my greatest achievement the fact that I've been fortunate enough to work with filmmakers whom I respect and have grown with. The awards/recognition are a follow up of these collaborations, which I cherish.”

Netherlands-based multi-lingual Russian actor Anastasia Reshetnikova has been busy over recent years acting in a series of features, shorts and commercials, including the Italian full-length The Mystery of a Castle in Tuscany in which she played the lead role of Demetra.

“I like switching between different languages, it’s just like switching between different characters. Now that I’ve made myself at home in English and Dutch in addition to Russian, I have started to learn Spanish,” she explains. “I think it’s good to have as many tools in your toolbox as you can. As for my plan, I’ll just go where the opportunity brings me. I’m simply glad I have all these options!”

She describes her future acting career as “a life-long journey, and I am curious to see where it brings me.”

Reshetnikova cites her strengths, as articulated by Dutch film director Juriaan Koeze, in whose short films Farewell and Come to My Window she starred. “A strong instinct and radar for storytelling; quick at understanding the depths of a character and how to fit into a story; patience and understanding of the work that needs to go into filmmaking; dealing with time restrictions, weather conditions, and all the other struggles; humble in the good sense of the word and devotion and patience to acting which proves love, tenacity, and passion for the art.”

Dance might be at the heart of Maia Elisabeth Sørensen’s work, but her films are about a lot more. This is evident in her current coming-of-age project Nicolaj-Boy Dancing.

“[In 2016] Nicolaj was then a 13-year-old boy in a dance class I was filming. He was completely in his own world, dancing wildly with himself and his own shadow, while the other dance students politely and properly followed the teacher’s instructions. He was not a skilled technical dancer, but I was completely blown away by his presence and passion for dance. Shortly after this meeting I found out that Nicolaj has autism spectrum disorder, which could explain his presence in the dance class, and my interest in dance shifted completely from an aesthetic language to the person dancing.”

“I find the teenage age in a person’s life incredibly interesting,” Maia adds. “This is when we experience most things for the first time. Everything is transforming, the body, the mind, and the emotions are raw, which is reflected in the way they dance and move. That intrigues me. I have been teaching this age group for more than 20 years. Working creatively with dance and film in this age group gives an insight into how they experience the world, and through their eyes we get to experience the world anew.”

Maia further articulates her hopes for Berlinale Talents 2021. “Since I have a sort of unconventional film background, coming from dance film and in the past years moving towards documentary, I’m curious to learn from other talents and speakers who have experience with hybrid formats. What their approach is, artistic methodologies, collaborations and funding strategies, and potentially meeting future collaborators.”

* This film was supported by the Netherlands Film Fund